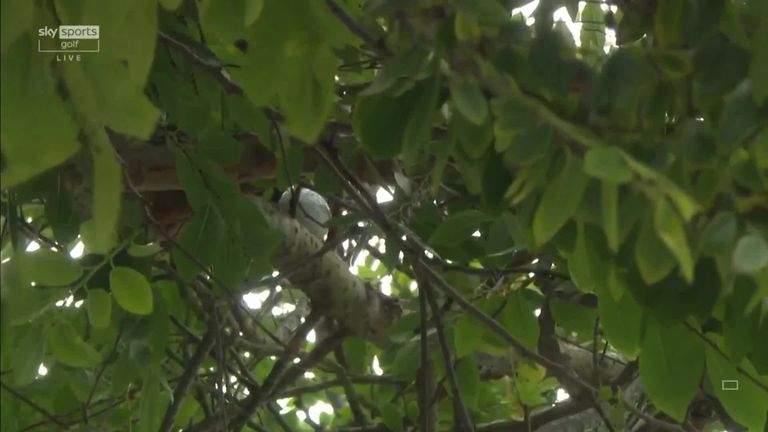 Mackenzie Hughes was the receiving end of an unfortunate break off the par-three 11th tee, as his ball bounced off the cart path into a tree!

Mackenzie Hughes suffered one of the most bizarre moments of misfortune in major history when his ball lodged in a tree midway through the final round of the US Open.

Hughes was tied for the overnight lead but struggled under the pressure of playing in Sunday’s final pairing at Torrey Pines, dropping shots at three of the first six holes.

But the Canadian roared back into contention with birdies at the seventh and ninth and he was just two behind leader Louis Oosthuizen when he came to grief at the par-three 11th.

Hughes dropped, and kicked, his club in disgust after pulling his tee shot way left, but what happened to his ball had to be seen to be believed, and the spectators gathering at the foot of a tree and taking photos in the branches confirmed where his ball ended up.

Mackenzie Hughes finds a tree off the tee at the 11th hole! 😮

📺 Watch the final round live on Sky Sports Golf or follow updates via the live blog. pic.twitter.com/fJyGZjsgXB

Then, slow-motion replays revealed just how unlucky he was. His ball initially found a way through the tree, but took a big hop off the cart path below and bounced straight back up into the branches.

A furious Hughes struggled to identify his ball before taking his penalty drop, although the crowd lifted the mood with chants of “shake that tree”!