“It probably doesn’t make a huge difference at one over or even this early in the tournament, but mentally it feels a bit better to birdie the last and I’m looking forward to getting back out” 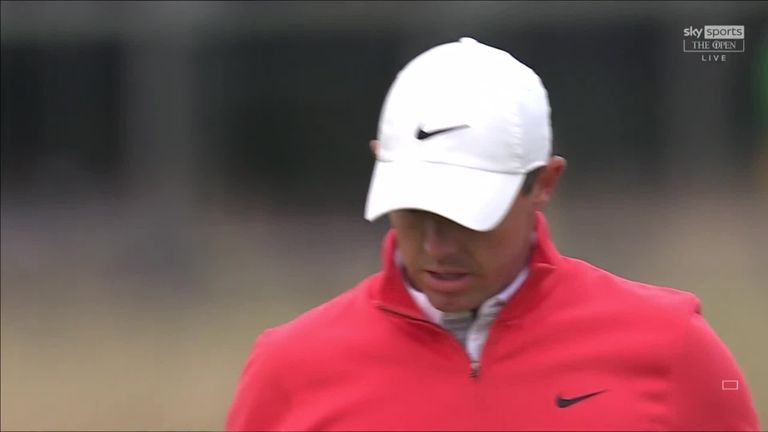 Dame Laura Davies, Claude Harmon III and Rob Lee look back at the highs and lows from Rory McIlroy’s opening-round 70 at The Open.

Rory McIlroy insisted he would sleep a lot better after a birdie at the last salvaged a level-par 70 on a frustrating first day of The 149th Open.

After opening with a birdie at Royal St George’s, McIlroy looked in the mood to banish the memories of his horrific start in front of his home fans at Royal Portrush two years ago, when he pulled his first tee shot out of bounds and ran up a quadruple-bogey eight.

That set the tone for a 79, and he missed the cut by one despite shaving 14 shots off his day one score in a riveting Friday evening performance, but he appeared set to avoid having to battle hard just to make the weekend with his encouraging start at Sandwich.

But after missing a six-foot chance for birdie at the second, the errors began to creep in and McIlroy bogeyed three holes in a row from the fifth before steadying the ship with a controlled approach to the eighth which he converted to get back to one over.

The 2014 champion erred again at the 11th, but two lusty blows with long-irons set up an opportunity for eagle at the 14th and, although he left the putt short, he tapped in for an easy birdie and finished the day on a high note with a closing three.

The 149th Open: Day one as it happened

“It probably doesn’t make a huge difference at one over or even this early in the tournament, but mentally it feels a bit better to birdie the last and I’m looking forward to getting back out tomorrow,” said McIlroy, whose playing-partner Tommy Fleetwood was one of five Englishmen, including Justin Rose and Danny Willett to return 67s.

“When we were warming up it felt like a nice breeze but when we got out there, especially out by the water, it was really windy. Anything around even par today was pretty good.

“After that little wobble on the front nine I set myself a little target of getting back to even par and I was able to achieve that and that feels good. I’ll probably sleep a bit better tonight and feel a bit better going into the second round.”

McIlroy was particularly pleased with his driving having been wayward with the big stick at both the Irish and Scottish Opens earlier this month, and his corrective surgery in practice was rewarded with two monster hits that found the fairways on the first two holes.

“One of the things I struggled with the last couple of weeks was the driver and to hit a tee shot like that down the first, 350 or whatever, down the middle, and then stuff a wedge close was the perfect start,” he added.

“I drove the ball way better than I have the last couple of weeks.”