Birmingham Phoenix captain Moeen Ali smashed three fours and four sixes in his 49 off 26 balls – with 22 of those runs coming in the space of four devastating deliveries – as they chased down 173 to beat Oval Invincibles; Moeen was earlier dropped twice, on 3 and 20 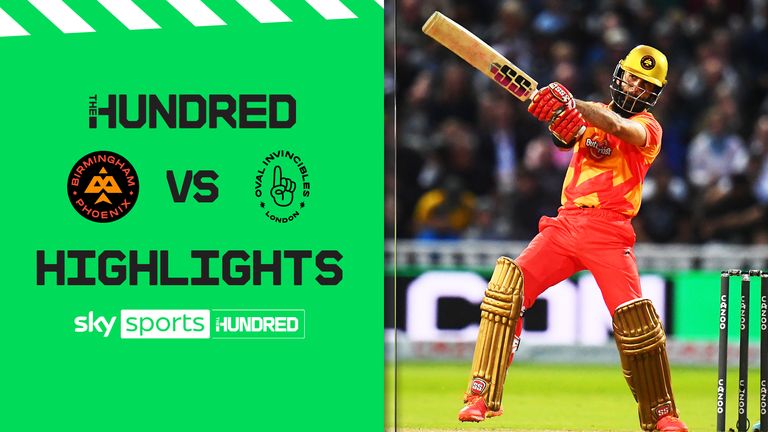 Moeen Ali fired Birmingham Phoenix to a thrilling win over Oval Invincibles as they chased down a massive score of 173 in front of a raucous home crowd at Edgbaston on Wednesday night.

STORY OF THE MATCH

After being put into bat, the Invincibles posted the second-highest score of The Hundred so far as a superb innings from Colin Ingram (81 off 43 balls) propelled the visitors up to 172-3 from their 100 balls.

But, in reply, teenager Will Smeed (45 off 28) and Finn Allen (23 off 9) teed off at the top of the order for the Phoenix, before Moeen then came in and blasted the ball to all parts!

The Birmingham captain smashed 49 from 26 balls, including three fours and four sixes – with 22 of those runs coming in the space of four devastating deliveries between the 63rd and 66th balls of the run-chase.

Moeen departed soon after, attempting one shot too many as he was caught at deep midwicket off the bowling of Saqib Mahmood, but rising star Chris Benjamin came in and cracked an unbeaten 37 off 16 deliveries to see them home with six balls to spare.

It was roles reversed from the earlier women’s clash, in which the Phoenix put down four catches in defeat – this time it was the Invincibles’ turn to put in an error-strewn effort in the field.

Most costly were two drops off Moeen, when the Birmingham skipper was on just three and 20. Reece Topley was the offender in the first instance, shelling a skier down at deep backward square-leg, while Jordan Clark put down an admittedly much trickier chance at cover.

Smeed was also put down twice, in the space of three balls early on in the Phoenix chase, with Sunil Narine spilling a fairly routine chance at mid-off and Jason Roy unable to cling on to a diving effort at backward point.

Smeed was on 2 and 3 at the time. Added to Moeen’s runs, the errors cost the Invincibles a total of 89 runs!

Ingram was in barnstorming form for the Invincibles to set up the game, hitting eight fours and clearing the ropes on four further occasions, while it was more of a joint effort with the bat for Birmingham.

Smeed, Allen, Moeen and Benjamin all fired for the Phoenix, but it was their captain who played the truly game-changing knock.

Shortly after being dropped for the second time, and with his side still needing 68 to win from 40 balls, Moeen went into overdrive hitting three huge sixes and a four in the space of four deliveries. By the time he lost his wicket, the Phoenix suddenly needed a far simpler 35 from 28 balls.

Phoenix batter, Chris Benjamin: “It was a high total to chase but we knew it was a good wicket and the boundaries felt a little bit smaller today. We just knew it was going to be good fun and wanted to make a good go of the chase.

“I do love going out there when the team really needs someone to step up. I think that really makes me switch on and focus. It makes me take responsibility and playing in front of that many people and that much noise at Edgbaston, I absolutely love it.”

Invincibles batter, Colin Ingram: “We felt like we had a really good total on the board, so to come away with a loss is quite a heavy punch, but the ball did skid on really nicely and a couple of their guys really got stuck into it.

“It was great entertainment and there were some big balls hit tonight but it is disappointing to be on the losing side of it. We have got a really good bowling attack with lots of variety so we would have liked to close it out.

“But I feel that we have got a really good side and a good thing going and I wouldn’t be surprised if you see us competing deep in the competition because we have got a great bunch of characters who seem to be gelling quite nicely.”

It’s off to Emirates Old Trafford on Thursday as Manchester Originals play host to Southern Brave in our latest double-header of Hundred action.

It’s a case of top vs bottom when the women meet live from 3pm on Sky Sports Mix, with the Brave having won each of their opening four fixtures, while the Originals are still looking to get off the mark.

As for the meeting of the men – live on Sky Sports The Hundred from 6.45pm – it’s all much tighter, with the home side sitting on five points from four games and the Brave on four ahead of the key clash.

Both games will also be available live on the Sky Sports Cricket YouTube channel!

Watch The Hundred live on Sky Sports between now and August 21.