“Our physio Matty Crowther has been checking his ACL and that looked alright,” Powell said. “That’s always the worst-case scenario but he felt a little bit better after the game.”

Castleford coach Daryl Powell is praying Gareth O’Brien will be fit for Wembley
after he hobbled out of his team’s 18-12 Super League win over Wakefield.

The former Warrington, Salford and Toronto half-back, who fell awkwardly onto his knee after putting in an attacking kick just before half-time, looked dejected as he sat on the bench before using crutches to make his way to the dressing room.

Powell says O’Brien, who played a key role in the Tigers’ Challenge Cup semi-final win over Warrington, will probably be sent for scans to determine the extent of the injury but he is hopeful he will be fit in time for the final against St Helens in a month’s time.

“Our physio Matty Crowther has been checking his ACL and that looked alright,” Powell said. “That’s always the worst-case scenario but he felt a little bit better after the game.

“I’m praying that he’s alright and he can get back out there as quickly as possible.”

Castleford made light of the injury to sweep aside their near neighbours to bring to an end their four-match losing run in Super League and extend their sequence of wins over Trinity to 15. 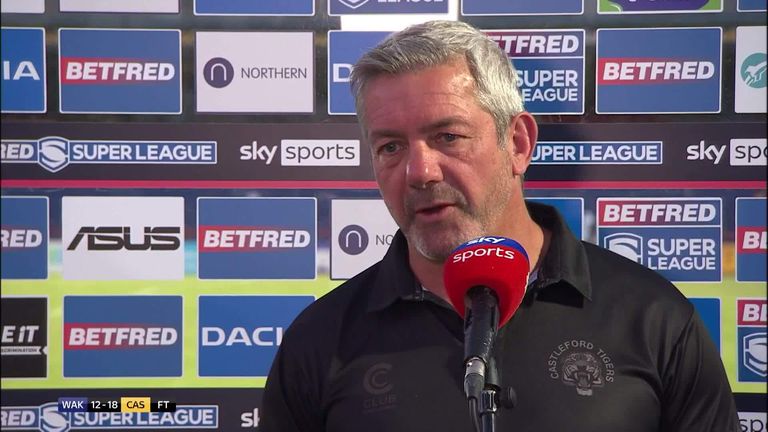 Powell’s team held a tenuous 10-6 lead at half-time but bossed the show after the break, eventually scoring four tries to two to clinch a seventh successive win at Belle Vue.

“I thought we were tough and we had to be to win the game. We are not all singing and dancing by any means but we were better defensively,” Powell said.

“We won the game and that’s the most important thing. We can hopefully start to build some momentum off the back of this and find some fluency.” 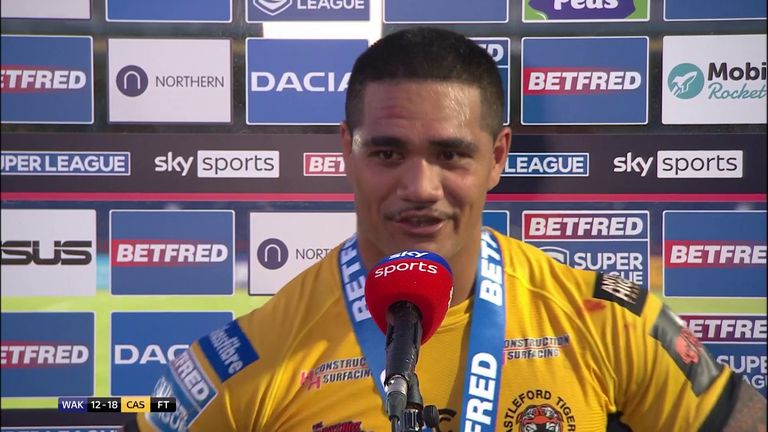 Wakefield also suffered a serious-looking injury just before the break, with centre Bill Tupou carried from the field on a stretcher, also with a knee problem that threatens to end his season.

“He’s in a lot of discomfort,” said Chris Chester, who is still looking for his first derby win as Trinity coach.

“I’m not too sure what it is, obviously it’s something bad but we’ll get it scanned tomorrow. “I think it’s a patella tendon injury. He didn’t look great but all the boys got around him in the dressing room and we’ve got to make sure we give him the support he needs.

“It didn’t have any effect on the result. We were our own worst enemies.

“I thought we started the game really well and I was disappointed to concede two tries from kicks. We needed to do better.

“I thought structurally we looked alright defensively but our attack looked a long way off. We just needed some calm heads.

“We weren’t good enough. It was another disappointing loss.”

Wakefield at least had England winger Tom Johnstone back from a two-month lay-off with concussion issues but he saw little of the ball and it was left to captain Jacob Miller to keep his side in the game with both their tries.

“We needed to get Tom in the game a bit more but he’s been out for nine weeks and just to have him back out there is pleasing,” Chester said.