Wales held Belgium to an exhilarating 1-1 draw to guarantee second place in World Cup Qualifying Group E and a seeding in the draw for the Qatar 2022 play-offs.

Kieffer Moore’s eighth international goal and a stout defensive display against the world’s No.1 ranked footballing nation got a spirited Wales over the line after Kevin de Bruyne’s opener on a night of high drama and emotion at the Cardiff City Stadium.

Despite having already assured themselves of a place in the play-offs next March courtesy of their Nations League results, finishing second in the group means Wales avoid drawing European champions Italy and previous holders Portugal in the more favourable side of the semi-final draw.

Wales, who are two games away from qualifying for the World Cup finals for the first time since 1958, could have ended Belgium’s 27-game unbeaten in World Cup Qualifiers late on but a wonder save from Koen Casteels prevented Neco Williams scoring a stunning winner.

The draw was a fitting finale to an encouraging 2021 for Rob Page and Wales, who await their World Cup play-off fate in the draw on November 26.

Man of the Match: Neco Williams.

The equation was simple for Wales in the 10th and final World Cup Qualifier: win the game, and whatever else happened elsewhere would be irrelevant in preventing them from securing a seeding in the play-offs, but with barely 12 minutes on the clock, Belgium’s class told.

After a subdued start, Belgium ratcheted up the quality and took the lead in trademark De Bruyne fashion as the Manchester City midfielder ruthlessly converted a first-time rebound after Axel Witsel’s blocked shot fell for him on the edge of the area.

Wales ensured they did not sustain further damage in the immediate aftermath before mounting their response, which culminated with 32 minutes on the clock.

Daniel James’ second attempt at a cross from the left finally found its way into the Belgium area where it evaded two woeful attempted clearances before falling for Moore, who controlled superbly before rifling the equaliser into the net.

Technically superior to their rivals, Roberto Martinez’s side controlled the remainder of the first half but were unable to reinstate their lead as Dedryck Boyata’s header curled inches wide before Thorgan Hazard’s stunning volley direct from a De Bruyne corner cannoned off the frame of the Wales goal.

The enthralling, end-to-end contest of the first half subsided in the second, with Wales keeping an eye on retaining what they already had, but they should have taken the lead for the first time within five minutes of the restart but Connor Roberts shanked wide.

Williams thought he won it for Wales when he cut inside and unleashed a stunning effort towards the far corner, only for Casteels to produce an equally impressive save.

News filtered through of the Czech Republic scoring the two goals they needed against Estonia to capitalise on any potential Wales slip-up but, despite a late Belgium onslaught, the hosts stood firm to finish off the job and secure their place in the play-offs.

How do the play-offs work?

The play-offs are a 12-team mini-tournament from which the final three European places will be awarded. They will feature the 10 qualifying group runners-up and two teams based on Nations League rankings.

The 12 teams will be seeded and split into three pots of four, each of which will stage their own (one-legged) semi-finals and a final on March 24 and 29 respectively. The winners of the three finals will advance to Qatar.

The draw for these matches will take place on November 26. Scotland already know they will be seeded, meaning a home semi-final. Italy, Poland, Portugal and Sweden are among the other teams heading to the play-offs.

What the manager said… 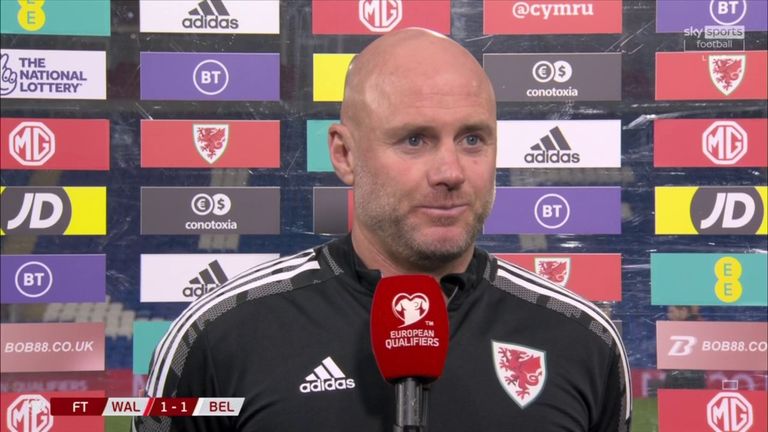 Wales manager Rob Page claims that qualification for the World Cup in Qatar is definitely achievable now his side have confirmed a home tie in the play-off semi-final after drawing 1-1 with Belgium in Cardiff.

Wales manager Rob Page: “I’m so proud. I was emotional at the end in the circle, I couldn’t be prouder of that group of men. To give that performance after Saturday’s performance… We went out for the win tonight; we weren’t happy sitting and holding onto a point. Credit has got to got go to those players; they were outstanding. With the crowd like it was tonight and on Saturday, we fancy our chances against anybody [in the play-offs].”

Wales eagerly await the World Cup play-off draw on November 26, 2021, where they will learn their fate and who stands between them and a place at Qatar 2022.